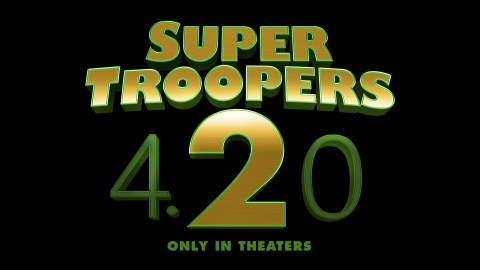 17 years in the making, the official trailer for Super Troopers 2 is now out in advance of the movie hitting theaters on April 20.  A “420” release date—how (not) ironic.

IMBD.com describes the plot: “when a border dispute arises between the U.S. and Canada, the Super Troopers are tasked with establishing a Highway Patrol station in the disputed area.”

As many know the film was self-funded, as the guys from Broken Lizard embarked on an Indiegogo crowdfunding campaign, asking fans for $2 million in donations in exchange for a wide variety of goodies. They wound up raising $4.4 million.

All the key players are back from the original as well as some new blood in the sequel, including Rob Lowe, Lynda Carter, Will Sasso and Jim Gaffigan.

Going by the 2:19 trailer the movie looks fucking awesome and I can’t wait to see it. It’ll be hard to rival its 2001 predecessor but I’m looking forward to finding out how close it comes.