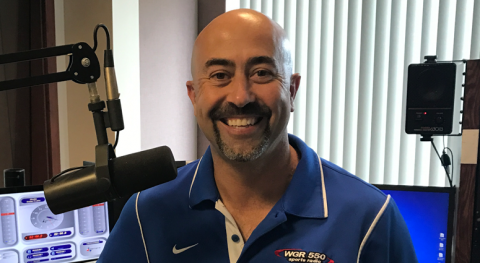 The debut episode of the Moran-Alytics Podcast drops Monday morning and seeing I have little-to-none, it was important to have my first guest possess both professional credibility and a likeable personality.  It’s a big notch in the win column for the good guys as I landed WGR-550 sports talk host and Buffalo Bills sideline reporter Sal Capaccio.

Sal and I first collaborated on some Buffalo Bills-related things in 2009 and while he’s gone on to achieve his professional dreams and have roughly 72,000 more Twitter followers than me — as I’m slap up this post with my son  nagging me for the last $10 in my pocket, Sal’s remained accessible through the years –a trait that has endeared him to many fans.

Not only did Sal take time from his busy schedule to do this interview but we talked for more than an hour.

A few things discussed during this interview include:

♦ Sal’s growing up in Cheektowaga and obsession with sports at a young age.

♦ Why he chose Syracuse over Buffalo State College.

♦ What led to his return to Buffalo and the process that led him getting hired at WGR.

♦ Some Bills talk, including a little perspective from the day the Bills broke their 17-year playoff drought and much more!

I also bring on  longtime friend Tone Pucks (@TonePucks) to debut a weekly “Pat With Pucks” segment, where we discuss our mutual admiration of fantasy baseball, the Bills quarterback scenarios and have differing takes on the NBC hit TV show “This is Us.”

I also debut a few weekly awards segments. It’s the first of what I hope to be many podcasts.  Make sure to tune in!