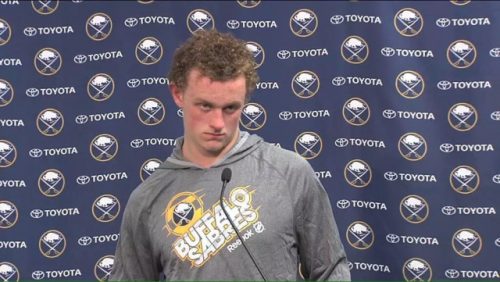 When the Buffalo Sabres look back at the 2017-18 campaign with the increasing probability of missing the playoff a seventh straight season, it’ll be losing games like Saturday that keep them on the outside looking in.  The Sabres played very well against a quality opponent in the San Jose Sharks. They did everything well — except win.  At the end of the day it’s all about points and Buffalo skated off the ice with none as the Sharks made one more play in a 3-2 victory at the Key Bank Center.

Buffalo led 2-1 with five minutes remaining in the second period but couldn’t muster another goal. It cost them dearly as Chris Tierney scored with just 12 seconds left in the second and huge Buffalo Bills fans Logan Couture beat Robin Lehner for the game-winner with 3:52 remaining in regulation after getting away from defensemen Jake McCabe and his broken stick.

Everything about this afternoon felt like a game Buffalo should win, and the frustration of losing wasn’t lost on the players.  Jack Eichel gave his hockey stick the Bo Jackson treatment on the way back to the locker room following the loss. Apparently the loss ruined Jack’s 21st birthday

Jack Eichel furious after Sabres lose to the Sharks on his 21st birthday pic.twitter.com/H5HHHZdv5Y

A few hours earlier Eichel earned himself a birthday gift that got taken away in controversial fashion.  He scored an apparent power-play goal with just under three minutes left in the first period, but immediately after San Jose head coach Peter DeBoer sprung a coach’s challenge for alleged goaltender interference. Sam Reinhart slightly caught the blocker of Sharks goalie Aaron Dell as he skated through the crease on a blast by Buffalo’s Risto Ristolainen. The rebound came to Eichel, who put it away.  The officials sided with DeBoer and the goal was disallowed.

MVP: The rejuvenation of Pominville continues. Figured to be a throw-in with the Marco Scandella trade Pommers is tied with Evander Kane for the team lead with six goals. He and Kane have scored 12 goals in 12 games.  The rest of the team combined has 17.  Sad!

LVP: What kind of world do we live in where Matt Tennyson is logging 21:05 of ice time? Tennyson was a minus-two, registered one shot on goal and zero hits.  Translation: he pretty much sucks and certainly shouldn’t be on that ice nowhere close to that much.

Don’t shoot the messenger:
Matt Tennyson’s 21:05 today is the highest TOI that he has ever had in a non-OT NHL game.

Bogosian, Beaulieu and Gorges are all hurt. Tennyson has been terrible. If they’re not calling up Guhle, this is what they get.

BOTTOM LINE: Buffalo’s just 3-7-2 after a dozen games.  Winning just a quarter of the time will get you buried in the standings pretty quickly.  Buffalo only plays two of the next seven games on their home ice and one of them is against Washington. If they don’t play well during this stretch we could be talking salary dumps, trades and (gasp)….. tanking well in advance of Thanksgiving.

UP NEXT: The Sabres don’t play again until Thursday night when they’re out west to face the Arizona Coyotes. The five-day break is the team’s longest of the season not counting the bye week.

(Episode 10) Sabres 1, Red Wings 0: The One Where A Winning Streak Starts