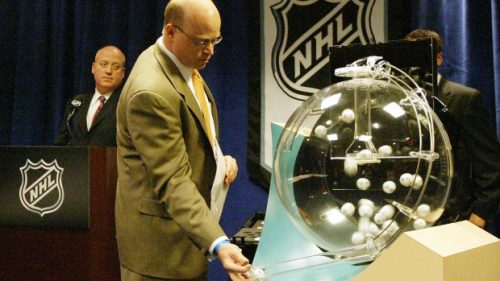 When it comes to missing the playoffs, the Buffalo Sabres are geniuses. After being absent from postseason play six consecutive seasons and running, fans are far more accustomed to rooting for the draft lottery success than any playoff series.

For fans forever embroiled in tanking saw losing to both the Panthers and Lightning over the weekend increase Buffalo’s chances of winning the lottery by 0.9% and getting a top three pick by 2.6%.

By virtue of their loss at Tampa on the final day of the regular season coupled with Detroit’s win over New Jersey, Buffalo finished in 26th overall—fifth from the bottom.  However, with Vegas having the same odds as the third-last place (Arizona) in this year’s lottery, the Sabres have the sixth-best chance of drawing the winning ping pong ball.

Here’s where the Sabres stand in regards to NHL draft lottery odds:

The team cannot finish any lower than ninth in the draft order.

The NHL draft lottery expected to be held April 29th. The actual NHL draft is June 23-24 in Chicago.