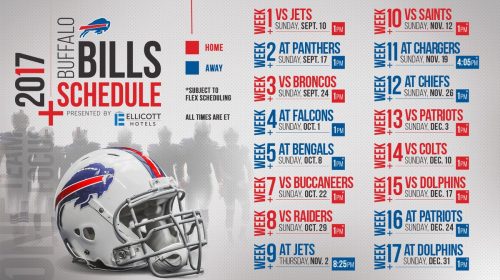 I have some thoughts on the 2017 Buffalo Bills schedule, because this is a blog and I’m supposed to have thoughts on it. Typically I can’t stand people praising or scolding a schedule predetermined years in advance, but there are a few things stand out to me about this slate, and I’m sure it’ll surprise most to know I generally don’t like it.

♦ I’m heated at the NFL for having Buffalo travel to Miami on December 31st—freegin New Year’s Eve to wrap up the season. It’s a personal Roger Goodell conspiracy against me.  I moved to Florida (Bradenton/Sarasota) around a year ago and last October made my debut at Miami’s Hard Rock Stadium for the Bills/Dolphins game. Not only myself, but several friends flew down to visit and we made almost  an entire week out of it. In fact, one of my friends found true love down here because of the Bills/Dolphins game (no lie).

♦  Ain’t happening this year. Cue the woe-is-me jokes.  Personal preference aside, the Bills have a large contingent of fans down to Miami each year for the game.  Being just days after Christmas (therefore unaffordable to most), not to mention the game literally being on New Years Eve and I’m sure fan representation will take a major hit this time around. Plus it’s Week 17 and let’s face it—that means the Bills are playing for pride and a few higher draft slots.

♦ The Bills play in New England in Week 16. To me that’s good news and here’s why:  the Pats will surely have the division clinched by then, plus Mike Gillislee will have the NFL rushing title wrapped up with two weeks to spare. I smell a New England letdown here. #TouchdownMike

♦ Being a bit more serious, losing at New England in Week 16 has the Bills being mathematically eliminated from the playoffs on Christmas Eve written all over.

♦ This Bills last six opponents: New England (twice), Miami (twice), Kansas City and Indy had a record of 68-28 last year. That final stretch is going to be—not easy. Having the Pats twice among road games at Miami and Kansas City, you have to figure realistically the best the Bills would do in this final stretch is go 3-3.  If it takes 10 wins to get a wild card spot that would mean Buffalo needs to win 7 of their first 10 to be afforded going .500 in their last half dozen games.

♦ I can’t believe the lone prime game is a Thursday night road tilt is at the lowly ass New York Jets.  It’s the eighth game for each team and man, that’s got serious potential to be a ratings disaster no one wants to see. Tell me you can’t see the promos now for the 3-5 Bills versus the 2-6 Jets? Tony Romo gonna talk up Christian Hackenburg? If there’s ever a game deserving to be on at 9:00am from London via internet feed only, it’s this.

♦ Wait, what—no Cleveland Browns on the schedule? I thought that shit was automatic, like the Bills facing the Lions in the preseason.

♦ I’ve always been a “want to watch my football Sunday at 1:00pm” kind of guy so my single-favorite thing about the schedule is Buffalo playing early Sunday 14 times.

♦  Buffalo will have extra rest playing the Tampa Bay Bucs (#SiegeTheDay) in Orchard Park following their bye, and get the New Orleans at Saints 10 days after playing the Jets the previous Thursday night.  Their lone opponent who gets extra rest is the Oakland Raiders, who’ll have 10 days off before facing the Bills.  That game is also in Buffalo.  Seeing we always get screwed by having to play New England as they’re coming off their bye or a Thursday game the week before,  this is a welcomed change.

♦ Seriously—no Browns? No Jags or Rams either? Ugh, this is going to suck.