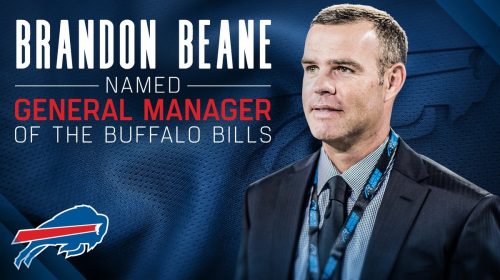 What was pretty much expected became official on Tuesday when the Buffalo Bills announced the hiring of Brandon Beane as the team’s 13th general manager.

He’ll be introduced by the team at a news conference Friday morning.

Beane, 40, had spent the past 19 years with the Carolina Panthers, including the past six with new Bills head coach Sean McDermott. Beane has worked in a variety of roles with the Panthers, starting with the communications department. In 2008 he was named director of football operations and had been the assistant general manager for the past two.

MoranAlytics Take: If the Bills continue to be mired in mediocrity over the next few seasons they’ll be no finger pointing inside the doors at One Bills Drive. That’s a far cry from recent years. For better or worse, Beane and McDermott are joined at the hip.  They became Buffalo co-workers in the same offseason, just the second time a Bills head coach and GM have begun their tenure in the same season in 16 years, and whether the Bills transform into contenders or continue their tradition of ordinariness, the pair will sink or swim together.

That alone makes Beane unequivocally dissimilar than his predecessor Whaley.  Was Whaley more to blame for the Bills futility these past four years or does that land on Doug Marrone and Rex Ryan? It’s impractical to answer given the disgruntlement between Whaley and his head coaches.  When Ryan was canned Whaley claimed that he wasn’t privy to Pegula’s decision to terminate nor did he make the call on Ryan’s hire to begin with—at least that’s what he claimed.

Whaley was a pretty good talent evaluator, and particularly excelled at plucking castoffs who became significant contributors—guys like Mike Gillislee, Lorenzo Alexander and Zach Brown.  He resurrected Richie Incognito’s career.  Unfortunately his biggest gaffes were legendary; from trading up for Sammy Watkins to pounding the table for E.J. Manuel and grossly overvaluing the impact Charles Clay could have on the offense.

Whaley’s ultimate demise was his incapacity or downright refusal to get on the same page as his head coaches. It’s something that reportedly ate away at the Pegula’s.  Whaley more-less shoved Manuel down two head coaches who didn’t want him and forced out Fred Jackson against Ryan’s wishes. There’s far more instances of discontent between sides.

For better or worse this won’t be a problem with McDermott and Beane.  The pair worked together for six years in Carolina.  Beane is GM today over other worthy candidates Brian Glaine, Brian Gutekunst and Trey Brown not necessarily because he’s a more skillful roster builder, but because he’s a better fit.  That’s something that shouldn’t be taken lightly.

I’m not a huge fan of Beane having no actual general manager experience, although I like the working his way up from the ground floor over the past 19 years aspect, including being the Carolina assistant GM for the past two.

There’s no denying how empowered McDermott is with this move. I mean, he’s approaching Bill Belicheck stature within the Bills. That’s a little concerning to me, considering he’s never been on the winning end of a NFL game as head coach. Don’t get me wrong, I have confidence the Pegula’s made the right call tabbing McDermott and now Beane, but it’s a guarded confidence.

Bottom line—no one gives a shit who the general manager. This team needs to win more games. If Beane, in conjunction with McDermott is what gets it done, then the duo will become legends in this town.