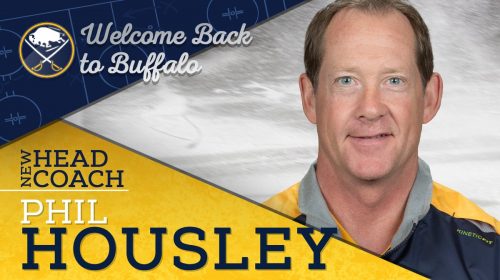 The new head coach of the Buffalo Sabres, its 18th in team history is a face most fans are familiar with.  The team announced today that Phil Housley got the job.  Housley had been an assistant coach in Nashville since 2013 and helped guide the Predators to their first Stanley Cup final this past season.

Fellow former Sabres players Scott Arneil and Bob Boughner were among other known candidates for the job.

Housley spent 21 years in the NHL as a player, including the first eight in Buffalo following being selected sixth overall in the 1982 draft.  His 1,232 career points rank fourth all-time among defensemen and he still holds the Sabres team career and season records for goals, assists and points scored by a defensemen.

While in Buffalo Housley netted 178 goals to go with 380 assists and 558 points in 608 games.  The 558 points still rank him fifth in franchise history regardless of position.

He went on to play for seven other teams after his time here was done.

“Based on his experience as a player and coach, we think Phil is uniquely qualified to be our head coach and to help us achieve our organizational goals,” said Sabres General Manager Jason Botterill in an official team statement “His approach to the game aligns with the way we envision our hockey team playing and we’re excited to see where his leadership will take us in the future.”

MY TAKE: Covering the Buffalo sports scene and/or being a fan teaches you to handle any major move with circumspect sunniness, no matter how great it appears on the surface. A few years ago when the Sabres hired Tim Murray and Dan Blysma, I ready to do somersaults with enthusiasm.  Blysma was a proven Stanley Cup winning coach and Murray was the brash, rink rat of a GM this team apparently needed.  We all know how that turned out.

Still, you got me again Sabres.  I’m throwing caution to the wind here— because I categorically love the hiring of Phil Housley.

I far from qualified to offer much insight regarding Housley as a coach. I don’t know much about him behind the bench. I know he was a successful assistant in Nashville and his knowledge helped their blue line finish second in goals scored in the league each of the last two seasons.  Lord knows the Sabres need to learn how to get more goals from their defensemen.

I do, however, feel confident pointing out the following thoughts:

♦ He should really help grow young Sabres defensemen Brendan Guhle and Victor Antipin. Maybe he can do more with Rasmus Ristolainen and Jake McCabe as well.  The former haven’t had the opportunity yet while the latter seemed to have any progress go stale under Blysma.

♦ As much as I wanted Housley, I wanted to NOT hire Rick Toccet even more.  Hated him as a player and going by everything I’ve read on him through the years, not a big fan of him as a person either. Kudos to Botterill for not bringing him from Pittsburgh with him purely out of familiarity.  Reports out there say he didn’t even get an interview with Buffalo. That tells me Botterill knew the guy is a douchebag the Pegula’s wouldn’t want.

♦ I was around 11 years old when Housley debuted with the Sabres. During his time here he became not just one of my favorite players on the team, but literally THEE favorite player of mine.  I even wore his number-six jersey during my youth floor hockey days, tho I was hardly the swift puck moving defenseman he was.

♦ It’s plays like this that show you why I felt that way about him.

#WoweeHousley@philhousley6 is the all-time leader for points by a Sabres defenseman (490). And our new head coach: https://t.co/HRlDJds5AK pic.twitter.com/oH1eVcKVBM

♦ “Wow Wee Housley” til this day is my favorite Rick Jeanneret thing to day. I’m sure a whole new younger generation  of fans will be introduced to the slogan soon enough.

♦ As much as I genuinely believe Housley’s appointment above all else is a hockey move, never undervalue the aptitude of a front office that includes Russ Brandon to make a move that initially appeals to fans and may ignite ticket sales. Again, I love the hire of Housley as a pure hockey move, but don’t be foolish and think the feel-good sentiments of Housley returning is lost among team executives either.

♦ I know Buffalo sports and storybook endings never should be mentioned in the same sentence, but how rad would it be to have Housley come “home” after all these years and lead the Sabres back to glory?

♦ I’m all in—-yet again.  It’s hard not to be excited about this team right now. I firmly believe Buffalo was already on the cusp of being a legitimate playoff contender, and it was Blysma’s coaching system and non-likeable personality among too many players that was most detrimental to their progress. I think Housley will do a better job, especially with the blue line.  That coupled with the front office experience Botterill brings from Pittsburgh has me feeling like this is a team that with a solid summer pickup or two can make late regular season hockey mean something again in Buffalo—and maybe beyond that.