On this episode of the Moran-Alytics Podcast, Patrick Moran is joined by one of the most recognizable  NFL Superfans, certainly among the “Bills Mafia.”  Ezra Castro, more affectionately known as Pancho Billa is Moran’s special guest on the show.

Pancho speaks comprehensively on a wide range of topics in an interview that goes on for nearly a full hour.  During that time he talks growing up in El Paso, Texas and the unlikely fashion in which he initially became a Buffalo Bills fan at around seven years old back in 1986.  Being a Bills fan just yards from Mexico is pretty rare, especially growing up in a home with his father a diehard Dallas Cowboy fan.

We talk about his love of football that started as a young kid and has never waned. Fortunately for Pancho he was smart enough to realize early on his dreams of being the next Kent Hull and playing in the NFL would never become a reality, so after high school he eventually focused his sights on a career becoming a mortician.  That’s right—he went to Mortuary school and got into that line of work.  Pancho talks about what led to him choosing that career and why he felt able to handle everything that comes with it. 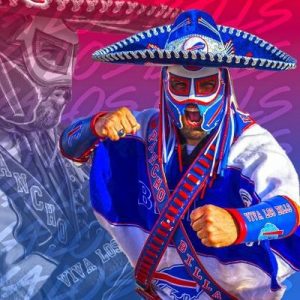 Pancho also reveals, in candid detail the moment he realized something was significantly wrong with his health, which unsurprisingly happened on the road for a Bills game.  He discusses the process of being diagnosed with cancer, what his initial reactions were and how both he and his family have handled it since.

Of course, we talk about the moment the entire world got to know Pancho Billa at the 2018 NFL Draft in Dallas when former Bills legends Fred Jackson and Andre Reed called him up to the stage to announce the team’s third-round draft pick.  You didn’t need to be a Bills fan or even a football fan to feel the emotion of the moment.

This is a great interview featuring one of the most genuine person you’ll ever hear.

You can follow Castro on Twitter at @Panchobilla1.  There’s also a Go Fund Me page set up to help support his ongoing fight with cancer at Pancho Power.