On this episode of the future award-winning Moran-Alytics Podcast presented by 26 Shirts, Patrick Moran chats with longtime veteran Cleveland Browns beat reporter Mary Kay Cabot of Cleveland.com on the first half struggles of the Browns as well as a primer for the Browns matchup against the Buffalo Bills this Sunday.

Cabot, a recurring guest on hit sports talk shows like The Dan Patrick Show, The Rich Eisen Show and the Jim Rome Show joins the Moran-Alytics Podcast for a second time (her first was back on Episode No. 27) and she chronicles why the Browns, crowned by many as the offseason champion have woefully underachieved during the first half of the regular season. Mary Kay discusses the offensive line and inconsistent play of quarterback Baker Mayfield as well the hot seat head coach Freddie Kitchens has quickly found himself in.

They also spend time getting listeners ready for the game on Sunday, with the Bills afforded an excellent opportunity to improve to 7-2 and in the process put Cleveland out of their misery for 2019.

After that Sean Chandler from the Sean Chandler Talks About YouTube channel is back to provide a  movie review of “Doctor Sleep”, a sequel to the 1980 horror/thriller “The Shining” that starred Jack Nicholson.  “Doctor Sleep” stars Ewan McGregor and Rebecca Ferguson with McGregor playing Danny, who several decades later remains traumatized by the sinister events that occurred at the Overlook Hotel when he was a child. His hope for a peaceful existence soon becomes shattered when he meets Abra, a teen who shares his extrasensory gift of the “shine.”

Make sure you subscribe to Sean Chandler’s YouTube Channel, which has steadily grown to over 138K subscribers on the strength of entertaining and informative content Chandler produces several times per week. 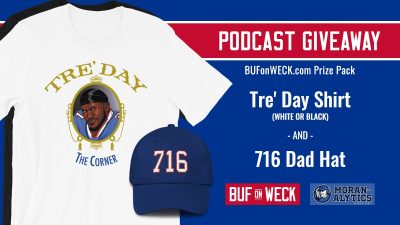 This week’s Moran-Alytics Podcast Prize Pack Giveaway is sponsored by BUFonWECK.com.  You can win a Tre’ Day T-Shirt as well as a blue 716 Buffalo hat for free simply by going to @PatMoranTweets on Twitter and using the pinned promotional tweet to follow the simple instructions.