On this episode of the Moran-Alytics Podcast presented by O’Neill’s Stadium Inn, Patrick Moran hooks up with veteran WGR 550 Buffalo Bills beat reporter Sal Capaccio for an extended chat at O’Neill’s in Orchard Park, one of Moran’s favorite spots for both drinks and wings.

It’s Capaccio’s third time on the podcast but the first with Moran in person after previously being his first-ever guest and also his guest on the one-year anniversary episode.

They begin with talk on Bills training camp and Capaccio breaks down how the offensive line rotation has worked, his mild surprise that Cody Ford is getting so much first team work this early, how John Brown has looked the part of a game changing through the first few days, how far long shots David Sills and Duke Williams need to go to make the team and a few players Sal wants to see step up and do more in the coming days and weeks.

They then take a break to chow down some wings and here’s a spoiler alert—the Cajun medium at O’Neill’s are absurdly delicious.

After spending a few talking wings, in which Sal’s convinced most wings taste the same—a take Moran considers controversial they shift to several questions for Sal submitted by fans on Twitter. The questions range from the Bills to general sports, Game of Thrones, his own former football career, what he thinks about his son possibly playing the sport and much more.

You can follow Sal on Twitter at @SalSports and of course be sure to check out his work at WGR550.com.

Special thanks to O’Neill’s Stadium Inn for being such a gracious host and banging out tasty wings for us to enjoy, which by the way rank seventh out of 44 spots on Moran’s Chicken Wings Power Rankings.  Everyone knows O’Neill’s is a great party spot for Bills Sunday home games—you need to know it’s also a place to get top notch food from a full menu and  of course wings that feature literally dozens of flavors. 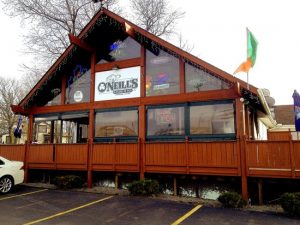