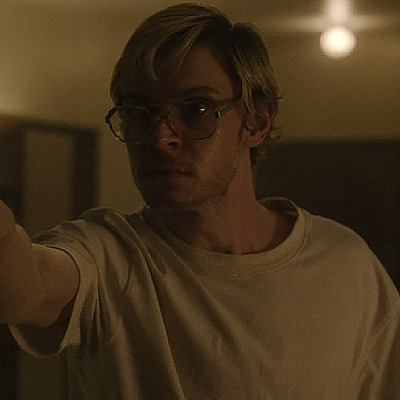 (SPOILERS FILLED REVIEW): I watched the 10-episode limited series “Monster: The Jeffrey Dahmer Story” on Netflix. I’ll warn again—-this review has A TON OF SPOILERS IN IT, so if you do not want anything spoiled then scroll right on past this post.  Also, I want to clarify that I don’t write these reviews in elite intellectual or grammatical fashion. I make them, or at least try to easy to comprehend–this ain’t the NY or LA Times and I ain’t Roger Ebert. With that out of the way, here’s my very long series of takes on this series:

PROS: The consensus coming in was Evan Peters would be/is outstanding as Jeffrey Dahmer and after watching I fully concur. He was very good in his portrayal of Dahmer.  That said, let me start with a hot take and say it was Dahmer’s father, Lionel played by Richard Jenkins that stole the series. I was extremely skeptical of the dude from Stepbrothers playing this kind of role but I’ll tell you what—he was sensational, at least until the end (more on that shortly)

One of the biggest reasons I didn’t want to watch this series was knowing how sadistic and gruesome Dahmer’s crimes were. I think “Dahmer” (that’s how I’m referring to this series for the remainder of this review) did a fantastic job letting you know exactly what’s happening while sparring the majority of visual carnage, at least while the acts were physically happening.

Another thing I enjoyed was it being overall extremely factually accurate in relation to reality. So many non-fiction series and movies so badly embellish facts it’s ridiculous (the recent Elvis movie is a great example). Very little twisting of facts here—in fact the only noteworthy discrepancy is that Dahmer’s murdered after Anderson in this series while in real life it was the other way around.

Also and this is big—“Dahmer” left me infuriated at Milwaukee’s racial and sexually orientation bigoted law enforcement in the story. I put this in “pros” because that it pretty much really happened that way for real and watching making me angry. That’s what it’s supposed to do, so mission accomplished.  Police consistently believed Dahmer over accusers, despite having a criminal record that included the molestation of a 13-year old and they took Dahmer’s side because he was white and his victims were pretty much all black and/or gay. At one point they believed Dahmer saying a drugged 14-year old was actually his boyfriend, 19 years of age and blacked out drunk on the steps—- and returned him back to Dahmer’s custody despite the pleas of neighbor Glenda Cleveland. Another time the police pulled a very drunken Dahmer over in his car when he literally had the dismembered body of his first murder victim in the back seat. The police even questioned him about the bags, Dahmer said they were lawn clippings and the cops let him go! Like the whole Jeffrey Dahmer story could’ve literally ended after one murder had they just got his drunk ass out the car and looked at the fucking bags!

Of course there’s then Glenda, who I thought had too much air time in the series (more on that in a sec) but called the cops dozens (and dozens) of times about Dahmer and the noises coming from his apartment next door along with constant foul stench—but they constantly blew her off and did nothing. Of course, Glenda was a black women living next door in the same ghetto apartment building as Dahmer, so she was blown off. Later in the series there’s a judge who literally ignores the heartbroken words of 14-year old murder victim Konerak Sinthasomphone’s father because he couldn’t speak clearl English. Time and time again we see law enforcement negligence, incompetence and even harassment to the victims families—and it drove me mad.

Circling back to Jeffrey’s father, Lionel, you really see the full arc of him and all the layers. He’s a nasty, neglectful husband and father in the early episodes, especially episode five where he fails to take any responsibility for how his son turned out.  That changes later in the series, especially episode eight where the enormity of Jeffrey’s crimes and national coverage/shame it brings become too much for Lionel to bare, who finally takes responsibility in a big way, as does his ex-wife, Joyce, who tries to kill herself.

Rounding this out, I liked the intertwining between Dahmer in prison over the last two episodes and the imminent execution of fellow serial killer John Wayne Gacy and found it particularly ironic Gacy was put to death the same day Dahmer was baptized.

CONS: The last few episodes and especially the finale felt enormously unsatisfactory. One example was Glenda being such a series mainstay and central figure, as well as the families of murder victims Tony Hughes and Sinthasmophone  to lesser extents after their loved ones were murdered as well as after  Jeffrey was caught and put on trial. Throughout that process were constantly seeing their pain and anguish trying to come to grips with everything and how much they hate Dahmer.  However, when Dahmer was murdered inside prison, we see absolutely nothing from the families finding out Jeffrey’s ultimate fate. I would’ve loved even a cutaway scene from the Hughes and Sintahsomphone homes when they learned Dahmer was savagely beaten to death. Instead we got basically nothing.

Also, I’m not saying Glenda didn’t have meaning in the series but OK, OK, OK—she lived next door to Dahmer, called the police a lot and got nowhere. She pushed for a memorial when the apartment building was demolished and that never happened (still hasn’t til this day). That all sucks. But I don’t think her character needed that much air time in the series devoted to her plight. I’d have rather seen more time spent on Dahmer before or after being caught or his parents and how they got to be so fucked up (we just know that they are not any deep dive into why other than back-and-forth accusations when Jeffrey’s a kid). I could’ve enjoyed more in-depth story telling on the murder victims, which lacked badly other than Tony (the black gay deaf kid).

Also, I praised overall refraining from becoming gory with gratuitous violence when it came to Dahmer murders, but in one scene they showed Gacy drug and kill someone in a scene that was excessively violent and was exactly what I was hoping to avoid when starting this.  That was nothing though compared to when (prison inmate) Christopher Sarver would beat Dahmer to death. I thought I was watching a scene from HBO’s “Oz” during that—what the fuck? Why bother sparring us the most grotesque parts for eight episodes so you could pour it on at the end?

Also I mentioned the nuance and layers of Lionel Dahmer, but that all falls apart over the last episode at all. He’s heartbroken beyond words and next thing you know he writes a book, a book that flops because of backlash claiming he was trying to profit, and then next thing you know he and his ex are in court fighting over whether Jeffrey’s brain should be preserved for psychological study.  I mean there’s some meat on those bones that were barely even touched and that sucks.

Lastly, considering the topic revolves around an infamous serial killer, I expected a psychological roller coaster ride with tons of intense moments and quite frankly it was closer to being a merry-go-round. There’s very little I’d consider truly enthralling about these 10 episodes and for a psycho who murdered more than a dozen people and the wreckage he left behind, the intensity in this series wasn’t cranked up nearly enough. I expected to be on the edge of my seat and/or have my hands over my eyes more often.

VERDICT: The term “mixed bag” gets tossed around an awful lot when it comes to TV shows and movies, but it truly fits like a glove here. I liked plenty but was also often turned off and quite frankly, verged on getting bored far more often than I expected when it’s a series about Jeffrey Dahmer. I think I arrive at “Dahmer” being very performance with great lead acting by Peters and Jenkins but the overall pacing and storytelling left plenty to be desired. It’s structurally, fundamentally and accurately sound but lacked the oomph I was anticipating. Hell, by series end I may have felt more sympathy towards Jeffey himself than anyone else other than the Hughes family, and I’m pretty sure that wasn’t the series intention. There’s worse things you could spend your time on but I won’t recommend this—read articles on the topic, maybe catch a Dahmer documentary to learn of his madness and wreckage—and save yourself a half dozen or so hours.   GRADE: C