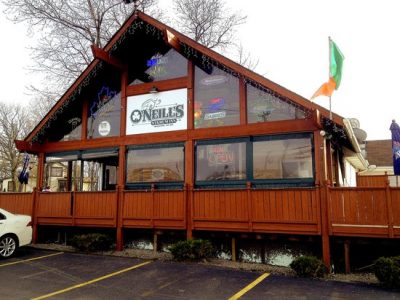 When one thinks of O’Neill’s Stadium Inn the first thing that comes to mind  is certainly not chicken wings.  That distinction belongs to heavy intoxication before, during or after Buffalo Bills games. Makes sense seeing the locale is literally across the street from New Era Field.  For those who don’t come around other than eight Bills Sunday Fundays per year already filled with tailgating burgers and hot dogs,  O’Neill’s is actually much more than that, with a full kitchen in tow that serves (several flavors) of chicken wings.

PROS: I strongly consider this one of the most under-the-radar spots in all of Western New York for great wings.  There’s literally a large chalkboard filled with different flavors.  That’s fine and dandy but let’s start with the traditional medium/hot wing.  They’re good.  They’re very good.  As a bonus, the  Cajun Hot is even better. So much better, in fact that it’s one of my personal favorites in the entire area. Like most I enjoy coming here to drink and socialize but I can’t emphasize enough how underrated their wings are.  They’ve recently taken advantage of Vonate Davis quitting on the Bills to have a hot-wing challenge where you win a t-shirt for not quitting.  Wings THAT hot aren’t for me but it’s a fun gimmick nonetheless.

CONS: I’ve noticed because of the volume of business there can be too many hands in the kitchen.  I’m unsure of his name but when the owner’s son is cooking these wings are about as good as I’ve had anywhere, but there’s been other times and cooks where they’ve been just “regular ole’ good.” 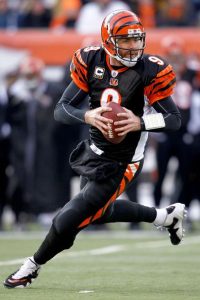 QB COMPARISON: Carson Palmer. You don’t realize how prolific he was until his numbers quietly smack you in the face.  Palmer’s 12th in the NFL all-time in passing yards. That’s how I feel about O’Neill’s.  I never anticipated being excited over going to O’Neill’s to —-eat wings, but quietly this became a go-to place.

OUTLOOK: I never expected O’Neill’s to be a place to enjoy wings more than social alcoholism.  I should also note if you’re not into the loud bar scene on a busy night, they have a much quieter section to sit down and eat restaurant style.  Like I said, a very underrated place and firmly in that second tier of great places in Western New York for wings — definitely my favorite spot around the Orchard Park area.