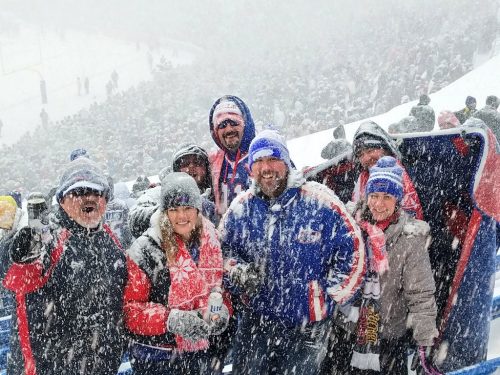 I’m not going to write too much on this game. For starters I’m spending the vast majority of my time and energy preparing to launch my Moran-Alytics Podcast sometime next month.  Plus let’s keep shit real here — if you truly desire top notch game analysis, wait on Joe Buscaglia’s seven game observations or Sal Capaccio’s arrows up and down.

But I do have a small collection of notes scribbled down I find worth sharing:

♦ I’m currently living in Bradenton, Florida and it was a huge source of Buffalo hometown pride seeing the fans so into the game despite blizzard-like conditions all afternoon.  The videos and images from TV and floating around the internet are amazing. It was one of those days where you’re a little extra proud to be a Buffalonian regardless of current residence.

♦  In a (NFL) world littered with millionaires who often, sometimes understandably treat football like a business before a sport, it was refreshing to see Buffalo Bills players having fun in the elements.  I’m not sure how much snow rookie Tre’Davious White’s seen before, but he literally looked like he was having the time of his life.   Sometimes watching grown ass men act like little kids serves as a reminder why we love football so much.

♦  There’s a 100% chance that someday down the road Kyle Williams is going up on the Bills Wall of Fame.  He’s been a leader and productive player since being drafted in the fifth-round in 2006 and a guy who simply gets how much this team means to the fans.  He says all the right things, which mean a lot more when you do all the right things as well.  Leave it to Williams to give fans all the credit for sticking around today. (Video: Nick Flipowski/WIVB-TV)

♦  Lesean McCoy was the most talented player on the field Sunday.  Lesean McCoy played like the best player on the field Sunday.  When both things take place, good things usually ensue. 32 carries for 156 yards and the game-winning touchdown. He’s now over 1,000 yards (1,007) and has overtaken Stephen Hauschka for Team MVP with three games to go. Thank God, because you can’t have a God damn kicker being your team MVP.

♦  Tough break for Nate Peterman. Those two passes to Kelvin Benjamin late in the first half, including the touchdown were beautiful.  I hope his concussion isn’t serious, because he looked like he had no clue where he was when leaving New Era field.

♦  Between Peterman and Tyrod Taylor I’d expect at least one healthy enough to go next week in what’s now a critical divisional showdown with Miami next week.  If by some chance either are I wonder what the Bills will do.  Even with a full week of preparation, do you think Joe Webb gets the start against the Dolphins? I can’t see anyone on the street coming in and being ready to start with less than a week of preparation.

♦  Matt Milano had 11 tackles. I don’t think you’ll see him as a reserve again.

♦  If you’re a Colts fan you must feel robbed.  That offensive pass interference on what would’ve been the go-ahead conversion was probably the right call, but that was the latest flag ever.  Then you have Adam Vinatieri miss a game-winning field goal.  This is shit that usually happens to Buffalo (more on that in this column’s conclusion).

♦  Rick Dennison having Joe Webb throw the ball near the end of the regulation from his own 15 is the icing on the cake for the shitty job he’s done all year. I want him gone for 2018 as much as any player on this roster.

♦  Alright, I’ve avoided it long enough. Sure, the decision ended up working out, but I think Sean McDermott’s decision to punt on fourth-and-one from the Indy 41 with 4:13 left in overtime was one of the softest cowardly calls I’ve ever seen.  It felt to me like he was playing that sequence like a tie was as good as a win, which couldn’t have been further from the truth.  After suffocating the Colts offense all game the Bills defense had finally gotten gashed just one full drive before.  It took the Bills getting a three and out AND an improbable as hell 34-yard Webb to Deonte Thompson completion on third down to set up the winning points.  You can call it strategy all you want but the Bills were fortunate to bail McDermott out, who by the way called time out and STILL decided to punt.   Had the Bills gone on to lose or even tie that game, he’d be getting crucified by the media and fans and rightfully so. It was a chickenshit decision, even if it worked out.

Conclusion: This team just doesn’t look good on paper but here we are again, legitimately in the playoff hunt at 7-6.  They’re winning games that pre-McDermott felt like they always found a way to lose.  If nothing else, this win buys the organization and fans another week of hope and optimism, because if they can beat Miami in Orchard Park they could be in this race until Week 17.  The Buffalo Bills are mentally tough. (Video: Buffalo Bills official Twitter)